The Trans-Balkan Electricity Corridor project will enhance security of supply and market integration, connecting Southeast Europe region with Italy. The € 31.2 million grant funds provided through the WBIF will trigger € 154 million of investments.

Serbia and the other Western Balkan partners are connecting and building the 321 km long Trans-Balkan Electricity Corridor, for which the Western Balkans Investment Framework (WBIF) provides €31.2 million of non-refundable EU funds.

The Economic and Investment Plan for the Western Balkans 2021-2027 is a reflection of the European Union’s efforts to encourage long-term economic recovery of the country and the region, with the support of the so-called green and digital transformation and the acceleration of regional connectivity and connectivity with the European Union. Intensive development of sustainable capacities for the production of renewable energy sources also requires the development of the network of transmission systems. The Trans-Balkan Corridor would be the backbone of this direction of development, which strengthens Serbia’s position as the energy hub of this part of Europe and at the same time directly protects the national energy supply security.

Investments in the Serbian electricity transmission network supported by the EU include the construction of a new 400 kV section Kragujevac – Kraljevo, upgrading the section from Obrenovac to Bajina Bašta and and Bajina Bašta – Višegrad (Bosnia and Herzegovina) and to the border with Montenegro to 400 kV. These much-needed investments will replace the outdated 220 kV network, which is prone to system failures and carries high operational and maintenance costs. 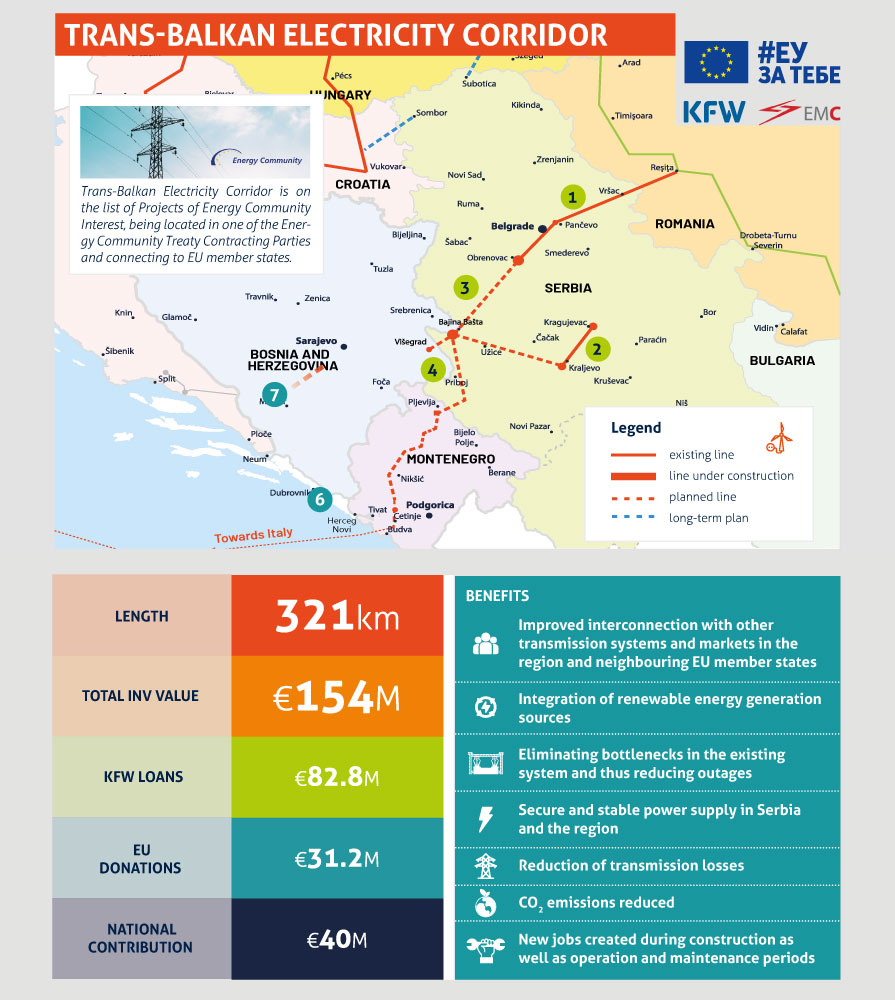 These Corridor sections are in various phases of implementation, and construction started in 2009.

Section 1: New single 400kV OHL Resita (ROM) – Pančevo (SRB) / part of the corridor that is located in Serbia was commissioned in 2017.  Section 2: Kragujevac – Kraljevo is finished in July 2022. This project is implemented within two lots (overhead line and the terminal substations), with the donation from the EU, under support of the WBIF, and with a loan provided by the German Development Bank (KfW).

The new 60 km long transmission overhead line between Kragujevac and Kraljevo will provide better connectivity and more stable voltage for one million users from central and southern Serbia. Electricity outages due to overloading the existing system will be minimized. The construction of the transmission line with electrical substations upgrade began in June 2020. Overall air quality will be significantly improved. CO2 emissions will be reduced by 10.000 tons per year. The savings will be around €540,000 annually, which is approximately 10.800 MWh per year. During construction, 86 new jobs will be created, as well as during the maintenance and management period.  Section 3: Obrenovac – Bajina Bašta and section 4: Bajina Bašta (SRB) – Pljevlja (MNE) – Višegrad (BiH) / part in Serbia are in the phase of preparation of design documentation and permitting, while the financing for the Section 3 is secured.

Trans-Balkan Electricity Corridor is on the list of Projects of Energy Community Interest, being located in one of the Energy Community Treaty Contracting Parties and connecting to EU member states.